15 of the Best Water Recreation Spots in Butte County

50 Things to Do in Butte County
Places View all

Rails to Trails in Butte County

The next time you’re on a bike path in Butte County, you may just be traveling on a strip of railroad history! There are over 15 miles of dedicated trails for bikers and pedestrians that were once where trains traveled through Butte County as it grew in the twentieth century. Although the tracks are gone, these “Rails to Trails'' live on today connecting communities and neighborhoods (as well as making a great jumping off point for short workouts or even huge biking tours of the county).

Much of Western Pacific Railroad’s old route between Oroville and the Feather River Canyon is now under Lake Oroville. The track (now operated by Union Pacific) was rerouted before Oroville Dam was built in the 1960s, but a section of the old rail-bed still exists on the south side of the Thermalito Diversion Pool. This 3.5 mile stretch, from near the Lakeland Boulevard trailhead to the bottom of Oroville Dam, is now part of the 41-mile long Brad Freeman Memorial Bike Trail. You can even explore the old train tunnel which is just one mile north of the Lakeland Boulevard trailhead or 1.6 miles north of the Feather River Nature Center.

Electric train cars once commuted between Chico and San Francisco in the early twentieth century, with connections in Oakland, Sacramento, Yuba City, and Oroville. Passenger service along the Sacramento Northern Railway ended in the 1940s and freight service ended in the 1960s, but you can still experience a tranquil 3.5 miles of this route along the Midway Bike Path.

The path begins in Chico at the intersection of Park Avenue and East 20th Street. After cruising by the Beverage District of South Chico, the bike path quickly enters the agricultural areas between Chico and Durham. Almond orchards erupt in pink blossoms in late February/early March and mature Chinese Pistache trees create a tunnel of fall color during the autumn months. Three miles south, at the intersection with Oro-Chico Highway, you’ll find the historic Patrick Ranch Museum. The path ends at Jones Avenue just a few miles north of Durham but many road bikers will continue on and find loop options along Butte County’s country roads.

The Butte County Railroad—later the Stirling City Branch of Southern Pacific Railroad—connected the Diamond Match lumber mill in Stirling City to a factory in Chico from 1903 to 1974. There were stops along the way in both Paradise and Magaila. You can still visit the Paradise Depot today, and it’s a perfect place to start exploring the Yellowstone Kelly Heritage Trail, which travels along 5.1 miles of the former rail alignment. A mile-long section of the trail goes downhill towards Neal Road while the remaining four miles head uphill through the heart of Paradise. The steady grade makes for a great workout! 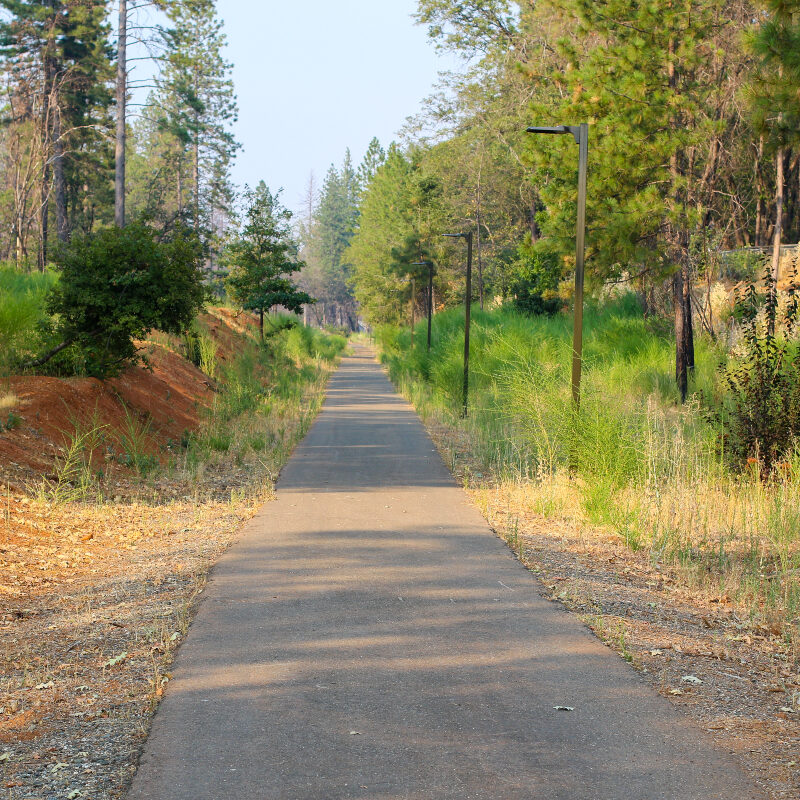 Read more
Like what you're reading?
Get our latest activities as they're published by subscribing to our newsletter.
Sign up for our newsletter to keep up with local events and travel ideas!
Outdoor Biking Trails
Read next
Share Tweet E-mail
Recent Activities

4 September Activities to Do in Butte County