15 of the Best Water Recreation Spots in Butte County

50 Things to Do in Butte County
Places View all

Butte County is located close to Sacramento and is an awesome place for Northern California fishing. Nestled in the foothills of the Sierra Nevada’s, it has beautiful scenery, great weather, and a long local tradition of incredible fishing, hunting and other outdoor recreational activities. In fishing, it offers diverse opportunities in type, location and skill level that are easy to access, whether you’re heading out on your own or hire one of the local professional guides. Butte Creek, Lake DeSabla, Paradise Lake, Philbrook Reservoir, and the Sacramento River are popular locations for a morning near the water, whether by yourself or with friends and family.

But if you’re looking for your chance to catch “The Big One,” my recommendations are Lake Oroville and the Feather River.

The ever-popular Lake Oroville is a great place for families to spend time together fishing for bass and landlocked king salmon. In particular, the land-locked King Salmon fishing has improved tremendously recently and is now extremely consistent. They grow quickly due to an abundance of food; reaching five pounds and more, they are strong fighters and delicious eating.

You can also enjoy the opportunity to catch 20 or more bass for a bonus out on the lake. With species that include smallmouth, largemouth, and spotted, bass enthusiasts on Lake Oroville have plenty of opportunities to enjoy 20-40 fish days. You can catch bass year-round, but it’s superb March through May. It’s not unheard of to catch over 50 fish a day (catch and release). Daily limits are five salmon and five bass per person.

A tributary to the Sacramento River, the Feather River produces excellent California salmon and steelhead fishing as well as striped bass and shad—and it’s possible to catch several of those all in one day. Every season, the area around Oroville teems with anglers of all types trying to catch these magnificent fish. If you like to river fish, it’s one of the best rivers and it’s great from either a boat or the bank.

Boat fishing on the Feather River is a real treat, with consistent numbers of salmon showing by mid- to late-August. Also along the Feather River, the Thermalito Afterbay outlet is the deepest, largest hole on the river. It attracts huge numbers of fish, and while the hole is now closed to salmon fishing for safety reasons, the surrounding area produces excellent salmon fishing.

The Feather River has one of the largest King Salmon runs in the state and is open from July 16 through Oct 31. In the fall, the salmon run on the river is the largest, with fishers commonly catching 20- to 30-pound (and even bigger!) salmon. By mid- to late-October, spawning salmon attract steelhead trout, which feed on the salmon eggs. Acrobatic, quick, and weighing two to eight pounds, the steelhead are a fun addition to the fishing opportunities. For skilled fishers, float trips are the ideal way to reach the riffles and runs where the steelhead wait.

Other fishing on the Feather River include shad in early summer; with large schools, catches are commonly 30 to 40 fish. Trying to hook striped bass makes for another fun excursion, as they are aggressive, tough fighters, yet easy to catch.

Whatever catch you’re looking for, you’ll find a spot to call your own and cast a line in Butte County.

Trip Tips
Like what you're reading?
Get our latest stories as they're published by subscribing to our newsletter.
Sign up for our newsletter to keep up with local events and travel ideas!
Outdoor Outdoor Fishing
Read next
Share Tweet E-mail 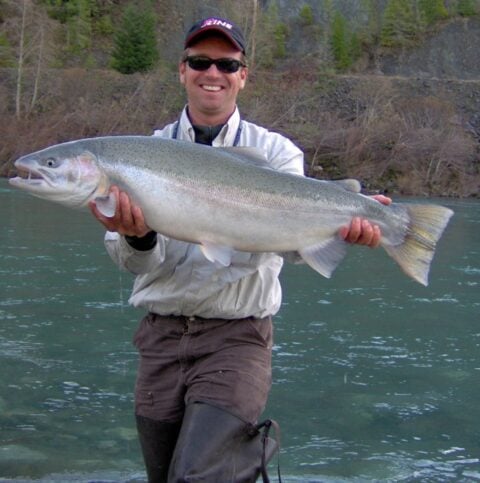 Averaging 300 fishing days a year, professional Northern California fishing guide Kevin Brock has honed his craft in a manner that few others are capable of. Specializing in guided trips on top West Coast rivers, he is rated as one of the best salmon and steelhead guides by the Salmon and Steelhead Journal, and is well known for his professionalism, expertise, and thousands of happy customers and successful fishing trips! Kevin has grown up fishing and hunting, giving him years of experience in his field. In 1995, he turned his passion into a profession and became a full time fishing guide. He is one of the few successful FULL TIME fishing guides that make a living only from guiding.

Explore Butte County supports local authors and travel writers. If you would like to submit a guest article, please contact us.
Recent Stories

The Skyway Through Paradise Ridge
The Skyway is the heart of Paradise, Magalia, and the rest of the Ridge. Enjoy…